This Day in Pixar History: Ed Catmull and the (First?) Computer Animated Film 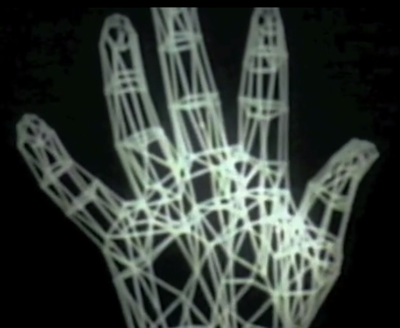 45 years ago, in 1972, Pixar co-founder Ed Catmull and Fred Parke created what may be the very first digital 3D film. They made this film while pursuing upper graduate degrees at the University of Utah. The film is short, and is an animation of Ed's left hand. I really enjoy how, at one point, the camera flies inside the model of the hand and into one of the fingers. Part of this animation was even used in the 1976 film Futureworld.

I think the best way to watch this film is via Robby Ingebretsen's website. Robby is the son of Robert Ingebretsen, who assisted with the creation of the film, and Robby gives a great description of the film, plus some details of meeting Ed Catmull at Pixar and getting a tour of the studio. The comments to Robby's post are also fascinating, and include many from individuals (or their family members) involved in the early computer graphics field. I love the details like how the film was created on two PDP-10 computers (My computer graphics course at the University of Minnesota was on a PDP-11). It's such a great look back at the start of computer animation.
Posted by This Day In Pixar at 8:15 AM No comments: