On this day in 2006, Pixar shareholders gathered at the Wattis Theater at the San Francisco Museum of Modern Art and overwhelmingly voted to merge with The Walt Disney Company. The merger gave Pixar CEO Steve Jobs 138 million shares of Disney, instantly making him Disney's largest shareholder (with over 7% of the outstanding shares) and placing him on Disney's board of directors. In addition, Ed Catmull, who was Pixar's president, became president of the combined Pixar and Disney Animation Studios. John Lasseter, Pixar Executive Vice President, was named Disney's Chief Creative Officer, overseeing not just the studios but also Disney Imagineering.

Disney and Pixar originally announced the merger on January 24, 2006. According to the agreement, Pixar shareholders would receive 2.3 shares of Disney stock for each share of Pixar stock they owned. Given that Disney's stock was priced at $25.99 prior to the announcement, the agreement valued each Pixar share at $59.77, for a total company value of approximately $7.4 billion (of which half belonged to Jobs). I would say Jobs did well with his Pixar investment - he bought the company from George Lucas for only $5 million!

At the time of the announcement, Pixar had not released information on any future films besides Cars, which was being released in June of that year. But there were rumors for a film about a rat living in a fancy French restaurant to be released in 2007, and other rumors that Toy Story 3 was in the works. At the same time, Disney had 2 films in production - American Dog and Rapunzel Unbraided, which we know were released as Bolt and Tangled, respectively.

Below are photos of stock certificates from both Pixar and Disney. Notice Steve Jobs signature on the Pixar certificate. 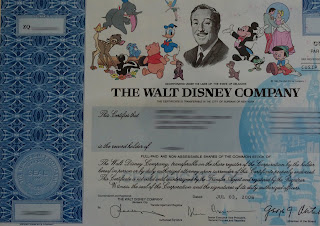 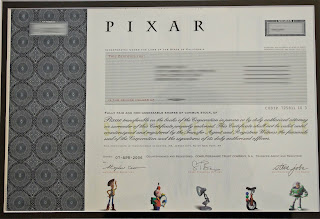 A good question is, was the merger a good thing for Pixar? What about for Disney? And what about Pixar's shareholders? These are complex questions and deserve their own blog posts. That will have to wait for another day!