UPDATE 2 (October 10, 2012): CAM just announced the date for the benefit has been changed from November 3 to November 10! Updated information can be found here.

UPDATE (September 27, 2012):  CAM announced the details for this year's event and tickets are now on sale! It looks like this year's event will focus on Finding Nemo 3D and Partysaurus Rex, including a Q&A session with Dr. Steve May (Finding Nemo production lead and Pixar CTO), Ronnie del Carmen (Finding Nemo story supervisor), Jim Capobianco (Finding Nemo story artist), Mark Walsh (Director of Partysaurus Rex and Finding Nemo directing animator) and Bob Whitehill (the 3D stereo supervisor on Finding Nemo 3D, as well as all of their 3D films). The Q&A session will again be hosted by Dr. Michael B. Johnson. In addition, you'll be able to view pre-production artwork from Brave in the 2nd floor gallery that surrounds the atrium.

Ticket prices are the same as last year ($450 for CAM members, $500 for non-members). Since an individual membership costs $45, you're better off becoming a member and getting a year's worth of benefits! It doesn't look like they are offering a VIP tier this year. In any case, this is a great opportunity to go inside the studios, see some awesome artwork, meet some of the filmmakers and support a great cause.

9 years ago today, the Cartoon Art Museum held their first benefit at Pixar, with event attendees enjoying hor's d'oeuvres, viewing artwork from the just released Finding Nemo, and hearing from Pixarians such as Dr. Edwin Catmull and Pete Docter. According to their website, the Cartoon Art Museum, also known as CAM, is the only museum in the western United States dedicated to the preservation and exhibition of cartoon art in all its forms. Located in downtown San Francisco, the museum has over 6,000 pieces of cartoon and animation art plus a number of galleries for exhibition purposes. Some of the current and past exhibits include one on the Avengers comic books, a celebration of Latino American comic arts, a humorous comic twist on Darth Vader and his son, and the art of DreamWorks' Puss in Boots. If you're ever in the San Francisco area, I would strongly suggest making a stop by the museum and checking out their exhibits and bookstore.

A couple of weeks ago CAM announced the date for their 9th annual benefit. There are very few ways one can visit the studios (unless you know someone who works there), and the CAM benefit is one of the best. I attended the benefit last December with my son Sam and our friend Santi from Spain, and had an awesome time! I've included a few pictures from last year's event; if you'd like to see more, please visit my flickr site.


Last year's event began at 11am. In addition to dining in the Luxo Cafe, we could explore the studio grounds (did you know they have a swimming pool?!) and interior areas that contained some of the great pre-production artwork from Cars 2, such as sculpts, drawings and storyboards. There was also artwork and storyboards from other Pixar films. I can say 2 hours was not enough time to take it all in - I could have spent a whole day going through it all! 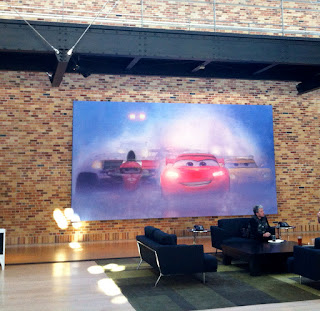 In addition to touring the studio, they had drawing demonstrations led by Pixar artists who would teach you to draw your favorite Pixar characters. Unfortunately I spent the majority of the time looking at the artwork and missed out on these demonstrations.

One of the biggest draws was the Pixar Studio Store, which is usually only open to employees. It was extremely hard to not go crazy and buy everything in sight; I thought I did well coming out of there only a couple hundred dollars lighter, having bought a few t-shirts, a Cars 2 jacket and a couple other little souvenirs.

At 1pm we all filed into Pixar's amazing theater. This part of the event was led by Dr. Michael B. Johnson, head of Pixar's pre-production engineering group. We were treated to 6 Pixar short films. Prior to each, Dr. Johnson led a Q&A session with a different Pixarian associated with the film:
After the short films, the Pixar artists hung out in the atrium where we could talk to them and have them sign, and sometimes draw characters, for us. This was definitely one of the highlights of the day for me. I have signed drawings of Buzz Lightyear by Angus MacLane and the characters Day and Night by Teddy Newton. I was also able to get both Ronnie del Carmen and Enrico Casarosa (director of La Luna, more on that later) to sign my copy of Three Trees Make a Forest (a wonderful book that I strongly suggest you pick up - I purchased my copy from the Cartoon Art Museum). Ronnie made a drawing of Nina while Enrico drew Bambino. I also spent some time talking to William Reeves about the early days of Pixar - I found out they animated one of their short films on a Cray Research computer at the Minnesota Supercomputer Center where I use to work.

There was also a live auction, but I didn't win any of the great artwork or other items that were available. This was OK as I had decided early not to spend much money on the auction - I knew I'd be spending money at the store. Plus, I had decided to go all out and purchase VIP tickets for the event.

After the auction, when most folks were leaving the studio, a small number of VIP guests headed over to Pixar's new building ("Brooklyn"), where we were treated to a special screening of La Luna plus an in-depth discussion with the film's director Enrico Casarosa, who described his inspirations for  and the process of making the film. After a second showing of the film, we went to the rooftop patio for a cheese and wine reception with Enrico and Dr. Johnson.

Hopefully this has given you a good overview of last year's event. Of course, each year is different, but I would guess they all follow a similar pattern. I've been fortunate enough to visit Pixar 3 times, and while all of them have been great, I'd say the CAM benefit was the best. Being able to chat with some of the key figures at the studio, and then seeing a pre-screening of La Luna and the discussion with Enrico was a once-in-a-lifetime event.

This year's benefit will take place on Saturday, November 3. Keep your eye on the museum's Facebook page or their official website for information on tickets and event schedule!