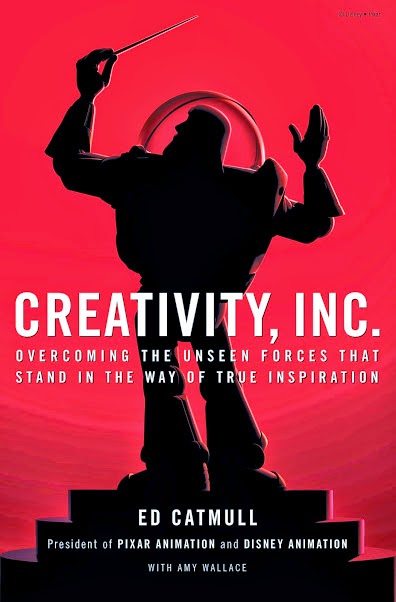 Readers of my blog probably know I've been a long-time admirer of Pixar's culture. Yes, my interest in Pixar started with their films, but as early as Monsters, Inc., what really piqued my interest was their culture. Their films were amazing, full of creativity, imagination and heart. How were they able to do this, film after film? And how were they able to grow the company and maintain that fun, passionate environment? I didn't see this happening at other companies, so what was the secret sauce Pixar had that other companies didn't? To learn more about how they fostered creativity, I watched the behind-the-scenes features on their home video DVDs. I listened to talks by Ed Catmull, read interviews with Brad Bird and read books like To Infinity and Beyond! and The Pixar Touch.

So I was excited when I heard Ed Catmull was writing a book! The man who has had the most impact on Pixar's culture, releasing a book on how that culture was built and maintained. The book, Creativity, Inc., is full of inside stories of the studio and how their films are developed. I really believe there will never be another book like this.

So I am trying to not rush through the book.  It helps that I'm not that fast of a reader! But I really want to take my time and appreciate its content as much as possible. As I'm reading it, I continue to be struck by how many of the techniques Pixar uses to develop films have corollaries to my industry of software development, especially Agile development methodologies like XP and Scrum. I realized this well before this book came out and have thought it would be good to write about these corollaries. Now that I'm reading the book, I think I'm ready to write these posts. I expect most of them to be short, using specific quotes from the book to focus on 1 subject or technique. I already have 3 posts in varying degrees of completeness, plus another half dozen or so quotes picked out for future posts, and am only on chapter 5! I should have my first post out within the next day or two.

UPDATE: My first post is now available. You can also use this link to see all posts in this series.