UPDATE: After originally posting this article, I found 2 other Monsters University pre-screenings happening at Pixar.

The first is for the Bay Area Women's Sports Initiative (BAWSI), being held on June 1. BAWSI is a non-profit organization founded by Olympic and World Cup soccer players Brandi Chastain and Julie Foudy, plus former general manager of the San Jose CyberRays women's professional soccer team Marlene Bjornsrud, that brings together women athletes to help children in the bay area. This event includes a reception with food from Pixar's Café Luxo, a silent auction, self-guided tours of the studio and grounds, and the screening of Monsters University. Tickets are much more reasonable at $275 but there are less than 20 tickets left. Check out the announcement for more information!

The second benefit is for the JDRF on June 15. John and Nancy Lasseter have hosted a JDRF benefit for the past couple of years, and it has great significance for them as their son Sam has type 1 diabetes. It is a black-tie dinner party that includes dessert reception plus silent and live auctions. Tickets are only sold by the table with a minimum of 10 people to a table, although the event page states they may open it to individuals closer to the day of the event.

All of these are wonderful organizations, and it's great seeing Pixar supporting them.
Here is my original post:

Do you want to see Monsters University almost 2 weeks before its theatrical release? And get inside of Pixar Animation Studios? Well, this may be your chance! Pixar is hosting a pre-release screening benefit for College Track on Saturday, June 8. The event will include a cocktail party and dinner, behind-the-scenes tour of the studio and campus, and viewing of Monsters University in Pixar's amazing theater!

There are only a couple of these types of events every year at Pixar. I have written about the 2011 Cartoon Art Museum Benefit and the Up pre-screening benefit for Emery Ed in 2009. Tickets are expensive, starting at $1000 for individuals and go up to $50,000 for a group of 10, but it would be an unforgettable day!

For more information, check out the College Track website!

Once again, I'm back looking at the financial earnings reports from Pixar when they were an independent public company. In my previous posts, I covered their quarterly earnings for the first, second and third quarters of 1996. In this post I'm going to cover their 1996 annual report.


For their first year as a public company, Pixar did quite well. The studio ended the year with over $38.2 million in revenues, more than 200% higher than the $12.1 million made in 1995. Almost half of the revenue, $18.8 million, came from their first feature film, Toy Story, released November 22, 1995. $9.1 million came from patent licensing, primarily from Silicon Graphics. Another $6.3 million came from software, such as RenderMan licenses and their 2 Toy Story-based CD-ROM products, The Toy Story Animated Storybook and The Toy Story Activity Center. Finally, they made another $3.9 million from television commercials and other animation services.


Gross margins for the year were amazing - over 87%, higher than the 80% margins in 1995. As I mentioned in my post for the 3rd quarter of 1996, Pixar had very low cost of revenue. According to the Feature Film Agreement signed with Disney in 1991 (and the subsequent CD-ROM agreement), Disney reimbursed Pixar for almost all costs related to the development and production of Toy Story and the CD-ROM titles. In addition, there were no costs of revenues associated with their licensing revenue. Their total cost of revenue was only $4.7 million, of which $3 million was attributed to their television commercials and animation services. Pixar had announced in 1996 they would be getting out of the commercial business and moving those employees to their feature film development teams. As this segment had the lowest margins (23% vs 95% for the other business segments), it is not surprising that Pixar made the decision to exit it. 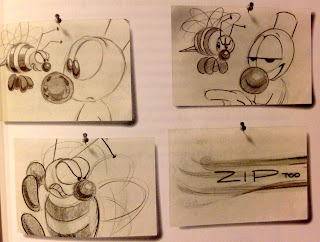 Research & Development expenses increased from $4.1 million in 1995 to $7.0 million in 1996, primarily in support of their software tools like RenderMan, Marionette (their animation system), and Ringmaster (a production management software system). General & Administrative expenses increased 87% from $3.0 million to $5.6 million. Pixar stated in the annual report that they expected G&A expenses to continue to increase, partly due to intense competition (and the corresponding higher salaries) for animators and other creative personnel. Pixar also experienced an increase in Sales & Marketing expenses in 1996 compared to 1995 (from $1.6 million to $1.8 million) due to the release of Toy Story and becoming a public company.

Even with all this good news, Pixar raised concerns regarding their future financial situation. They stated they expected a substantial decline in their operating results in 1997. The primary cause of this was the expected drop-off in revenue from Toy Story. They only expected revenue from the Toy Story home video release, and the majority of that would occur in the first half of the year. And according to their agreement with Disney, they received a lessor amount of home video revenue than theatrical revenue.

In addition, Pixar had decided in early 1997 to discontinue its CD-ROM production business. The business had been successful, but Pixar wanted to reassign most of the 60 employees in that department to other groups such as feature film production. This meant Pixar would experience a "material adverse impact" (accounting lingo for "we're going to make less money than we expected") on its operating results in both 1997 and 1998.

Pixar also warned of a decline in RenderMan revenue, as the company focused more on their film business, plus they expected increases in operating expenses from continued growth in their operations and research and development efforts.

Finally, they had no new films due for almost 1 1/2 years. A Bug's Life was to be released in late 1998, and Pixar didn't expect to recognize any revenue until later half of 1999. Also, at this point, Toy Story 2 was still scheduled to be a direct-to-video release, also in late 1998, which meant no revenue from that would be received until 1999. I did find it interesting though that they mention the possibility of releasing Toy Story 2 to theaters rather than direct-to-video. I had always thought that decision had been made late in its production.

It should not be much of a surprise then, given all the cautionary talk on decreasing revenues and increasing expenses, that Pixar stock was stuck in the low to mid teens. I made my first purchase of Pixar stock in April, 1997 for $15/share. Obviously, I was in it for the long term!

I am probably one of those rare (some may say weird) people who enjoy reading annual reports, especially the ones from Pixar! They always started out with an entertaining and informative letter from Chairman and CEO Steve Jobs. His letter in this report was 15 pages long, and include some beautiful drawings, pre-production artwork and storyboards from Toy Story 2, Geri's Game and The Adventures of André and Wally B. In addition to discussing the previous year's results, Jobs provided a good summary of the what's and why's on the newly signed co-production agreement with Disney (I will discuss this agreement in detail in a future post). He also discussed Pixar's 3 core capabilities that would enable them to become a world-class animation studio: Creative, Technical and Production. The annual report also discussed their purchase of land in Emeryville to build a new studio facility. Pixar had put down a $300,000 non-refundable deposit for the land, and while they had not made the final decision to move ahead with building the new studio, the report stated that was their intention.

The next post in this series will cover results from the first quarter of 1997.

Posted by This Day In Pixar at 9:21 PM No comments:

A lucky group of about 2 dozen bloggers will be converging on Emeryville next week for the Monsters University Bloggers Press Event! 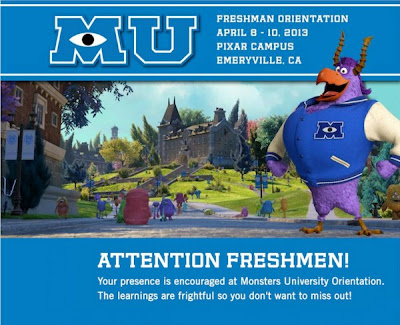 The event begins Monday the 8th with a reception at the Pixar studio, where the bloggers will get to view footage of Monsters University and see the short film The Blue Umbrella. Things really take off on the 9th with a day full of classes, including:
It looks like there will also be fun events like a tailgate lunch and college type activities.

Finally, on Wednesday, the group will spend the day touring the Walt Disney Family Museum. It sounds like an awesome experience!

Here is the list of bloggers I know of that will be attending the event. I'm missing a few, and if you notice only 1 Pixar blogger (@ThePixarTimes) has stated they are attending. I'm guessing there will be a few more announced over the next couple of days, and I will update this list once that happens.
An alternate method would be to look for tweets with the #MonstersUEvent hashtag.

As a side note, almost exactly 1 year ago I published my first blog post. The topic? The Brave Blogger Press Event! Wow, time has sped by! In that first year, I published about 60 posts (not including a couple dozen more that I started but haven't finished!!) and have met some amazing people! For those of you who read these posts, or follow and chat with me on Twitter, I am very grateful! I realize posts have been few and far between the last few months. But I think things will be getting back to order and you'll be seeing posts from me on a more regular (i.e. frequent) basis.

Monsters University opens in the U.S. on June 21! Who else will be attending opening day?

Posted by This Day In Pixar at 5:40 PM No comments: