Here are the start and birth dates for November! Sadly, it's a quiet month. Let's begin with start dates!

As for November birth dates, these aren't Pixar employees but some actors that have voiced characters in Pixar films: 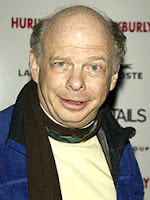