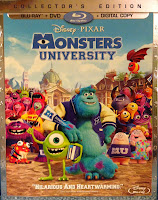 It took a couple extra days but it finally arrived! Yes, I'm talking about the Monsters University Home Video! I pre-ordered mine from the Disney Store and thought it would arrive on the 29th, but it didn't show up until late Halloween afternoon. But I think it was worth the wait! I purchased the 3-disc combo pack (Blu-ray, DVD and digital copy). Since I pre-ordered it, I also received a set of 4 beautiful 10" x 14" lithographs, each showing a different scene from the movie.

I haven't had a chance to watch the movie or look at any of the features yet but did download the digital copy. I'm very happy to say the download process was simple. I've downloaded a number of films from Flickster and Ultraviolet, and absolutely hate that process. But downloading Monsters University was a pleasant surprise. I am a Disney Movies Reward member, so I logged in there to record my points for purchasing the film. Once I did that I was given a link to download the film to iTunes. I clicked on that, which launched iTunes and began the download immediately.

As an extra surprise, in addition to the digital copy of the film I received the iTunes bonus content which I wasn't expecting. This includes a look at the music for Monsters University and The Blue Umbrella (the beautiful short by Saschka Unseld that proceeded Monsters University), plus features like Campus Life, Monthropology, Story School, Scare Games, Welcome to MU, Scare Tactics, Color and Light (can't wait to watch that one), Paths to Pixar (excited about this one too), deleted scenes and others. It even includes the Easter Egg I found out about reading The Pixar Post's review of the Blu-ray (The Easter Egg features Adrian Molina discussing the opening title sequence for the film with samples of his storyboards - so cool).  I can't wait to start digging into all of these features, plus those on the Blu-ray bonus disc! It's going to be a fun weekend! 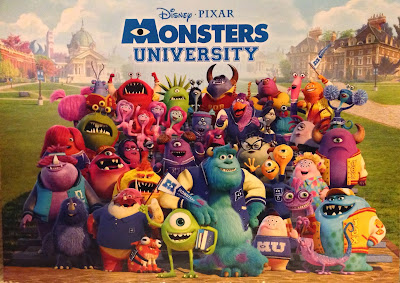