It's April Fools Day, so what better way to celebrate it than with a story of April Fools pranks! Tia Kratter is a long time Pixar employee, starting her career as a digital painter on Toy Story in 1993.  Since then she has been the shading art director on a number of films including A Bug's Life, Monsters, Inc., Cars and most recently Brave. 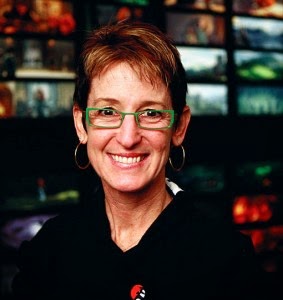 Growing up in a family of practical jokers, she decided to play an April Fools joke on her co-workers. So on April 1, 1998 she sent a company-wide email saying she was quitting. She fooled quite a few people (she even got a "Goodbye Tia" cake!), and has quit every year since (at least through 2009). She even fooled CEO Steve Jobs on 3 separate occasions! You can tell Tia is a true Pixarian, as her reasons for quitting are always original, such as becoming the art director for Tron 2, going to work in a wax museum and (my favorite) air brushing monster trucks!

Not to be outdone, her co-workers did get her back one year. I won't say how - if you want to find out go to the Disney/Pixar official YouTube channel and watch the "Tia Quits" Studio Story, which is narrated by Tia Kratter and Pixar producer Jonas Rivera.

I would love to hear if Tia has kept this tradition going and if so, what new ways she has come up with for quitting!