Five years ago today, on April 24, 2012, Pixar announced their film lineup through 2015 at CinemaCon. This was an exciting time for Pixar; it was only a couple of months before the release of Brave, and Monsters University was well into production with a release date of the following year, and all of us Pixar fans were clamoring to hear about a couple other untitled films. Back in 2011, Pixar had announced that Bob Peterson and Peter Sohn were working on a film, and all we knew is that the working title was The Untitled Film About Dinosaurs. Well, during the conference Pixar tweeted the official title, The Good Dinosaur. In addition, we knew Pete Docter was also working on a new film, appropriately titled The Untitled Film That Takes You Inside The Mind, but at the conference it received its official release date, June 19, 2015. 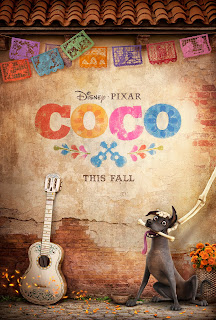 The final announcement was that Lee Unkrich was teaming up again with Darla K. Anderson to bring us a film about the Mexican holiday Dia de los Muertos. Unkrich and Anderson had last worked together on the 2010 blockbuster Toy Story 3. Very little else was known about the film, no release date was provided (although rumors were that it would come out in 2015 or 2016) and all we were left with was this short synopsis:

Now, 5 years later, we're just a little less than 7 months away from the release of Coco!

Coco looks to be a visually stunning and unique film! Thinking back to the announcements from that day in 2012 fills me with anticipation and excitement for Pixar's future. Between those announcements and now, not only did we get the films we knew about (Brave, Monsters University, The Good Dinosaur and Inside Out), but Pixar also released Finding Dory last year, which was the number 2 film of the year, only behind Rogue One: A Star Wars Story. And before Coco comes out later this year we're getting Cars 3 this summer! I'm so excited to go back and explore this world, and expect it to be one of the biggest hits of the summer. That's a total of 7 films. What does that mean for the next 5 years? After Coco, there are only 2 officially announced films, The Incredibles 2 for 2018 and Toy Story 4 in 2019. Plus, there are 2 untitled films scheduled for 2020. What are those 2 films, and what's in store for the following 2 years? And then what will be on the slate 5 years from now? Here's a few names to think about: Pete Docter, Pete Sohn, Bob Peterson, Dan Scanlon, Ronnie del Carmen, Enrico Casarosa, Angus MacLane, Mark Andrews, Andrew Stanton. Thinking about these folks and what they may be dreaming up just gets me pumped for Pixar's future!