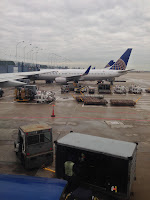 My first blog post on our trip to Disney covered the planning we did for the trip. This post finally gets to the good part - arriving at Disney World! As I mentioned in the first post, our flight left at 5:55am. That meant getting up at 2:30am (I think I should reconsider my insistence on starting our vacations as early as possible! Ha, that will never happen!).

Note, I am adding a number of photos throughout these posts. But I'm doing very little processing on them at this point. Once I get home and spend a little more time with them, I'll upload them, plus probably more, to my flickr account.

We had no issues flying through Chicago and arrived in Orlando at 12:30pm. We hopped on the Magical Express bus and headed to Saratoga Springs. I had checked in online a few days before arriving, so we just had to receive our welcome package and keys, and go to our room to drop off our carry-on bags.

We were all pretty hungry so decided to walk to Downtown Disney for lunch. We ate at the Wolfgang Puck Express (in the marketplace), and I think we all liked what we ordered - I had the Chinois Chicken Salad (an Asian salad with cabbage, crispy wonton strips, cashews, chicken and a ginger/sesame honey dressing) and my wife had the meatloaf sandwich. Two of my kids had the large order of the baked Macaroni & Cheese (which I found bland but they liked), and one had chicken tenders.

After spending time in Basin smelling the different soaps and using salt body scrubs (only on our hands; they seem to look down on trying to use the body scrubs on your entire body), and walking around the Marketplace, we headed back to our room to relax for a couple of hours before heading to the Magic Kingdom for the night. 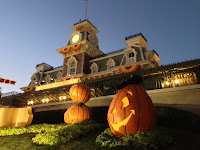 We had to make a stop at will call to pick up our annual passes, then it was through the gates and to Tomorrowland to pick up fast passes for Space Mountain and ride the Tomorrowland Raceway. We had dinner at Cosmic Ray's, then went to Carousel of Progress and rode Buzz Lightyear's Space Ranger Spin. 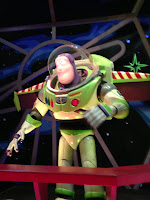 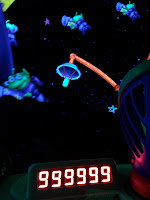 You may have seen a picture that I tweeted showing my score - 999,999! Now, I might really be that good. On the other hand, it might have been a defective score computer. But I have the photo of my score, and I won't be ashamed to show it off if necessary!

When we came out, the Wishes! fireworks show was just starting. One thing you should now, I love fireworks. I prefer Illuminations at Epcot over Wishes!, but it's still a great show. So even though our fast passes were ready for Space Mountain, I insisted we watch the fireworks. As soon as the fireworks were over we hustled over to Space Mountain. And I may have made a mistake at this point. We saw that the standby line was only 30 minutes, and we had about 50 minutes before our fast passes expired. We figured we could go quickly through the standby line, do the ride, and then use our passes to get a second quick ride.

It seemed this plan was working well. The queue didn't stop until we were only about 3 switchbacks away from the loading point. But one thing I've noticed with Space Mountain is that they seem to allow a large number of fast pass guests to proceed compared to regular guests. There are also 2 sides to Space Mountain, and the fast pass guests take up 1 side, plus they will allow them to come over to the other side. So what should have been about a 15 minute wait grew to close to 30 and we still had to traverse the last long line behind the wall to get to the front of the queue.  It was at that point that a voice came across the PA to state the the ride had experienced a temporary malfunction, and the work lights came on. Now I'm really kicking myself because if we had done the fast pass line we probably would have been done by this point. We waited for almost 20 minutes and were just about to give up when the lights went off and the remaining folks in queue cheered. A number of people left during the maintenance so it only took about 5 minutes to get to the front. And as usual, it was worth the wait! But I'm a bit concerned about the maintenance of the ride, as this is the second trip in a row where the ride shut down while we were in line (the previous time the ride went down for an extended period and everyone had to leave the building).

When we came off the ride the fast pass and standby lines were very long (well past the fast pass distribution area), so we decided it was time to leave. We took a final ride on the People Mover (one of my favorites!), then headed out. We got back to our hotel at about 11:30pm.

The next post will cover our first day at Epcot and the Food & Wine Festival! 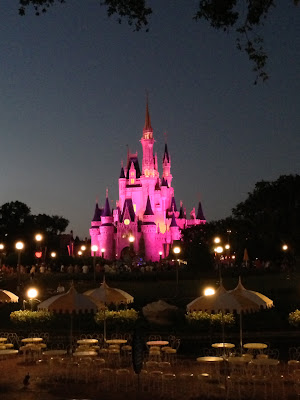