YES!! It's almost here! I of course mean the release of Monsters University! It's been 3 years since we first heard about Pixar going back to explore the monster world, and I'm very excited to see this film! As with all Pixar films, there is some great merchandise available. Other sites have done a wonderful job showing off a lot of it, including The Pixar Post with articles on the "Build-A-Scarer" plushes and the Series One Vinylmation that is now available. I wanted to highlight some of the books and other merchandise that has caught my eye.

To start with, if you haven't visited the official Monsters University store, you need to! Disney and Pixar have done an awesome job marketing this film, and the Monsters University website is a great example. The site looks just like a regular university site with campus maps, lists of courses, current events and a store that you can buy real merchandise. It's been difficult for me to control my impulse to buy everything; I have limited myself to only a 2 armed MU hoodie (I wanted the 4 arm version but my wife said she wouldn't let me wear it in public with her. What's up with that?!?!) 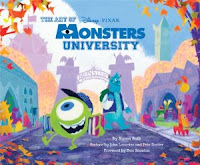 As for books, as usual there are a wide variety with my favorite being The Art of Monsters University. I just ordered mine, as I knew I'd want to look through it and was afraid of spoilers. The Art of books have great concept art and usually contain little stories and anecdotes about the development of the movie. Karen Paik is a great choice for author; she has previously written To Infinity and Beyond!, a great book on the founding of Pixar, plus worked on The Art of Ratatouille and The Art of Cars 2. In anticipation of the new book, I have been looking through my copy of The Art of Monsters, Inc.; I especially love the drawings of the Monstropolis neighborhoods done by Harley Jessup, the monster drawings by Geefwee Boedoe and Ricky Nierva, and paintings by Dominique Louis.

I also bought the Monsters University Fearbook. This is a "yearbook" style book, and I think it will be a lot of fun! From the book's description:

Go beyond the screen with the Monsters University Fearbook. Learn all about the fraternities and clubs on campus; find out who is most likely to become a Scarer and who is the class clown; get recaps of the year's highlights; see the monsters' class photos; and more. This 80-page full-color yearbook, which also includes ads, memory pages, and signature pages, is perfect for anyone who wishes THEY could attend MU. 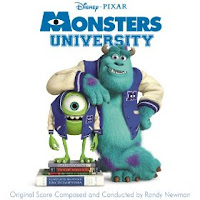 I'm a huge fan of movie soundtracks, especially for Pixar films! I am looking forward to the Monsters University soundtrack. The Monsters, Inc. soundtrack is one of my favorites, from the fun music over the opening credits, to the scare floor theme, the emotion of Boo's theme and the song "If I Didn't Have You", so I can't wait to hear how these themes may be worked into the new soundtrack, and hear all the new music. I love the track "Roar" that was already released and could be heard on the "It All Began Here" trailer. The Monsters University soundtrack will be available on June 18, 2013.

One note, many of the books give away the entire story from the film, so if you don't want to be spoiled then I recommend waiting until after seeing the film before cracking them open. And even with the soundtrack, individual track titles may allude to plot points, so again, be careful!
Posted by This Day In Pixar at 7:38 AM