The excitement for The Good Dinosaur is really starting to build! A couple weeks ago was the bloggers press event, and last week Pixar released a new trailer for the film. We're only a little more than a month away from its theatrical release! 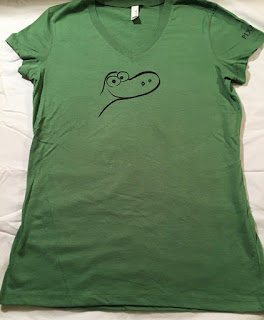 I was very fortunate to go to the Pixar studio last month. It had nothing to do with The Good Dinosaur press event; rather it was due to the amazing thoughtfulness of my friends Santi and Laura, and the generosity of Pixar Supervising Animator Victor Navone and his wonderful wife Candy. I had a great time, and was able to meet some Pixar legends like Ralph Eggleston and Bob Peterson.

While there, we of course had to stop at the Pixar Studio Store. At that time they didn't have much Good Dino merchandise, but they did have some cool t-shirts and I picked up a few. So with the film just a few weeks away, I thought it would be fun to give one away in a Good Dino giveaway!

This is a women's medium Arlo tee. It a soft tee with the film's protagonist on the front. The word "Pixar" is on the left sleeve, and on the back is the film's title. I just love the minimal, clean design. What a great way to show your Pixar spirit at The Good Dinosaur theatrical release!

So how do you win this Pixar Studio Store shirt? Hopefully it's not too tough, just fill out the form below and hit submit! There are a couple of rules. To enter, you must be at least 18 years of age and live in the 48 contiguous United States. If you are under 18, you can have a parent enter. Only one entry per person - multiple submissions will be ignored. No purchase necessary to enter. The giveaway starts NOW and will end Saturday, October 17, 2015 at 11:59pm Central Time. One random winner will be chosen and contacted via the email address used to enter the contest. Once the winner claims their prize, I will announce it here in this post and on Twitter. Good luck! 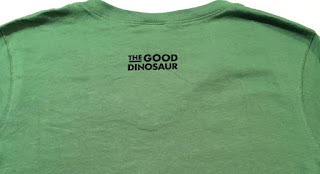 UPDATE (October 18, 2015)
Congratulations to Jenny Y. on winning the contest!

As part of the contest I asked, "Which upcoming Pixar film are you most excited for". Perhaps not surprising, The Good Dinosaur was the overwhelming favorite, taking in over 55%. Next was very close with The Incredibles 2 coming in at 18% and Finding Dory at 16%. Coco only received 9% of the votes, which surprised me.