As I wrote earlier, Pete Docter came to the Twin Cities earlier this week to give a talk at the Westminster Town Hall Forum. You can find Pete's talk on Minnesota Public Radio. so I'm not going to give a full write-up of the talk, instead I wanted to just write about a few of the highlights for me from the evening. 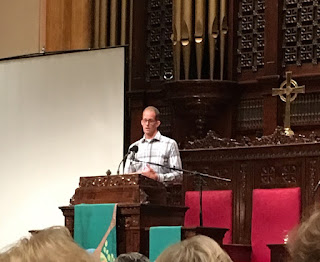 In true Pixar form, the night started with a short film. Pete showed Winter, one of his student films while he was at CalArts. It can also be found on the Pixar Short Films Collection Volume 2.

After the short, Pete got into the main part of his presentation. While speaking, he showed clips of Pixar films to help get his points and ideas across. He talked about how Pixar was originally a computer hardware manufacturer, and that the first time he met CEO Steve Jobs was when Steve came to lay off half the staff. He then began talking about Pixar's feature films and directing his first film, Monsters, Inc. While he thought the original premise (monsters scare because it's their jobs) was great, it just wasn't working. He said it wasn't until after he and his wife had their daughter Elie and he began to struggle with spending time both at home and work that he realized Sulley's conflict between loving his job and Boo should be the key premise of the film.

He then talked about Up and how it began as a floating city with 2 princes. Again, the film went through major changes as he realized what he liked about the story was the idea of escaping the real world.

After a description of film development process at Pixar he went into a great discussion on the development of Inside Out. He discussed how they came up with the 5 emotions, their voice actors, and each emotion's trigger (Fear - uncertainty, Anger - injustice, Disgust - purity, Sadness - loss, Joy - benefit, gain). He said that over 177,000 storyboards were created for the film. (I think Monsters University still holds the record for largest number of storyboards with 227,000). He went into how story reels are created and how much time the process takes - for an average film with 27 sequences, each sequence takes 3-5 sessions, each of which take 3-4 hours.  They will do this 7 or 8 times throughout the development of the film. He also said making mistakes is an essential part of the process, as they know they'll get things wrong. He said they know if they don't schedule the time to be wrong they'll quit trying new things.

A few other interesting comments Pete made, most of which came during the Q&A portion of the event: 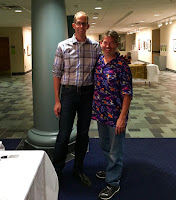 He ended the formal part of his presentation answering the question why he makes films. Pete said movies are an art form, and all art is about storytelling. He stated "...art is as essential to our existence as breathing and eating." By telling stories about our life experiences, it can bring us closer to each other.

These are awesome and powerful words. I think our world needs these words, and I'm so glad Pete Docter and the folks at Pixar make the films they do.

During Pete's talk he spoke of the importance of collaboration, and the sense of community in Minnesota, which I think was very present during the event. Afterwards as people waited in line to meet Pete, there was an energy as people mingled and talked. There was a wide range of people, from parents with children, high school and college students, and older adults. I spoke with a few students who were animators or wanted to become filmmakers and work at Pixar, and spent quite a bit of time talking to 2 of his music teachers from when Pete was in elementary and high school (the pictures of Pete and myself were taken by his high school music teacher). In a way, those of us at the talk were doing what Pete does when he makes films - telling stories and getting closer to each other. 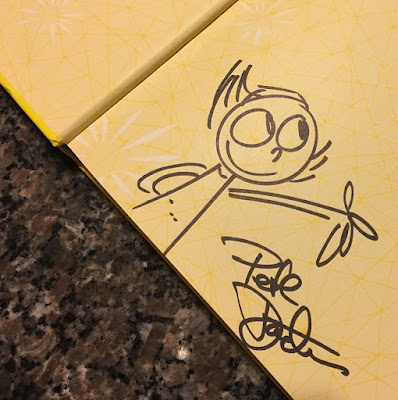 Email ThisBlogThis!Share to TwitterShare to FacebookShare to Pinterest
Labels: Inside Out, Monsters Inc, Pete Docter, Up, Westminster Town Hall Forum